Are You Ready To Break The Chaos Kid Cycle?

End the cycle of destructive programs in your family once and for all by uncovering the hidden programs that are driving a wedge in your marriage right now.
Order Invisible Lifestyle Mini Course

Overcoming Negative Programming is Easier Than You Might Think

If you answered “yes” to any of the above questions, unfortunately, you’re missing the key ingredient that is literally the foundation of ALL successful marriages. But all hope is not lost however. What IS important to keep in mind right now is this…

The house we are “dropped into” is NOT our choice.

In fact, there are so many WRONG ways to raise a child that MANY people are raised in “Chaos homes” that produce troubled children (and troubled adults).

Did YOU Grow Up In a Chaos Home?

Chaos homes are created when parents who have never dealt with their own Chaos childhood, raise their own children…only to give them the same treatment that THEY were given as a child.

It is a sad but true fact that Chaos homes produce Chaos Kids.  And unfortunately, Chaos Kids have marriage trouble.

I know this first-hand because I was a Chaos Kid who married a Chaos Kid. This is the reason I lived 27 years in marriage Hell.

In fact, here’s even more proof…

I Recently Conducted a Study Where I Spoke By Phone With 210 Troubled Couples.

I discovered that 93% of those marriages had either one or BOTH spouses who grew up in Chaos Kid homes.

Only 7% of the struggling couples consisted of TWO individuals from good homes.

If YOUR marriage is in trouble, chances are, you share something very similar with these couples – ONE or BOTH of you are “Chaos Kids”.

So What Is a Chaos Kid? And What Does This Mean For Your Marriage?

If you’ve ever said to yourself, “This is not the man/woman I married!”? then chances are very high that you married a Chaos Kid. You might even be one yourself!

A Chaos Kid can be recognized in a marriage when a troubling event takes place that causes the spouse to “snap”. (Quite often this happens when the troubled spouse is around 30 to 40 years old.)

This traumatic event could be:

When this troubling event arrives in your life, something I call the “Chaos Engine” is triggered in the brain of that spouse.  This Chaos Engine is actually a set of programs installed in the spouse’s brain during their first ten years by their parents.

When the Chaos Engine is turned on, you could say that “all hell breaks loose” because that’s how it feels.

And when a child was raised in chaos, that is what they will try to recreate.

This could involve irrational behaviors such as:

Throughout the first ten, critical years of a child’s life, the “programs” that children receive from their parents affect them for the rest of their lives.

In the case of a child who was raised in a stable, secure home, for the rest of their lives, they will find that they naturally gravitate towards successful choices in their marriage, social life and career.

Since I was not raised in this sort of home, it was in the 27 years of struggling in my own marriage years that I found the solution to repairing the damage I received from growing up in a Chaos home and turning my life into something with purpose rather than continued chaos.

And now it’s time for you to do the same… 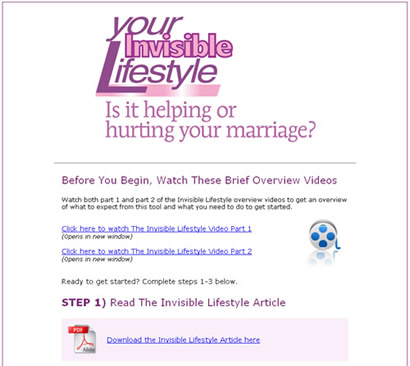 Above is an actual screen shot of the Invisible Lifestyle Mini Course materials area you’ll receive access to once your order is complete.

The Invisible Lifestyle mini course includes 4 main components that get into the details of the problem and the solution surrounding the Chaos Kid issue.

COMPONENT #1) In the first part of this system, you’ll watch the “The Invisible Lifestyle Overview Videos” as your orientation where I walk you through the entire mini course so you know what to expect and what you’ll need to do.

COMPONENT #3) The third component you’ll receive is The Invisible Lifestyle Workbook that gives you a way to actually find your programs from your childhood, identify them and compare how your two sets of parents programmed you.

COMPONENT #4) And finally, the fourth part of this system is the “How To Apply Your Invisible Lifestyle Results Manual” which tells you what your answers mean, what to do about them now and how you can start to overcome your conflicts with no hard feelings on either side.

You'll Also Get This Complementary Free Bonus With Your Order Today...

When you order the Invisible Lifestyle Mini Course, you will also receive instant access to my Chaos Kid Radio series where you will hear from REAL Chaos Kids, married to other Chaos Kids who managed to find relief in their marriage.

Here's How this works

Nothing is shipped to you. All you need to complete the Invisible Lifestyle Mini-Course is your computer and the ability to listen to MP3’s on your computer or mobile device.

Once your order is confirmed, you’ll receive a confirmation email which will include the web page where you can immediately begin the Invisible Lifestyle Mini-Course.

In that same email, you will also find the link that you will need to click on to download the Chaos Kid Radio Series to your computer.

We offer a 100% Money-Back Guarantee so ordering is risk free. In short, if you’re not satisfied for any reason, just let us know within 24 hours of placing your order and we’ll gladly issue you a refund.